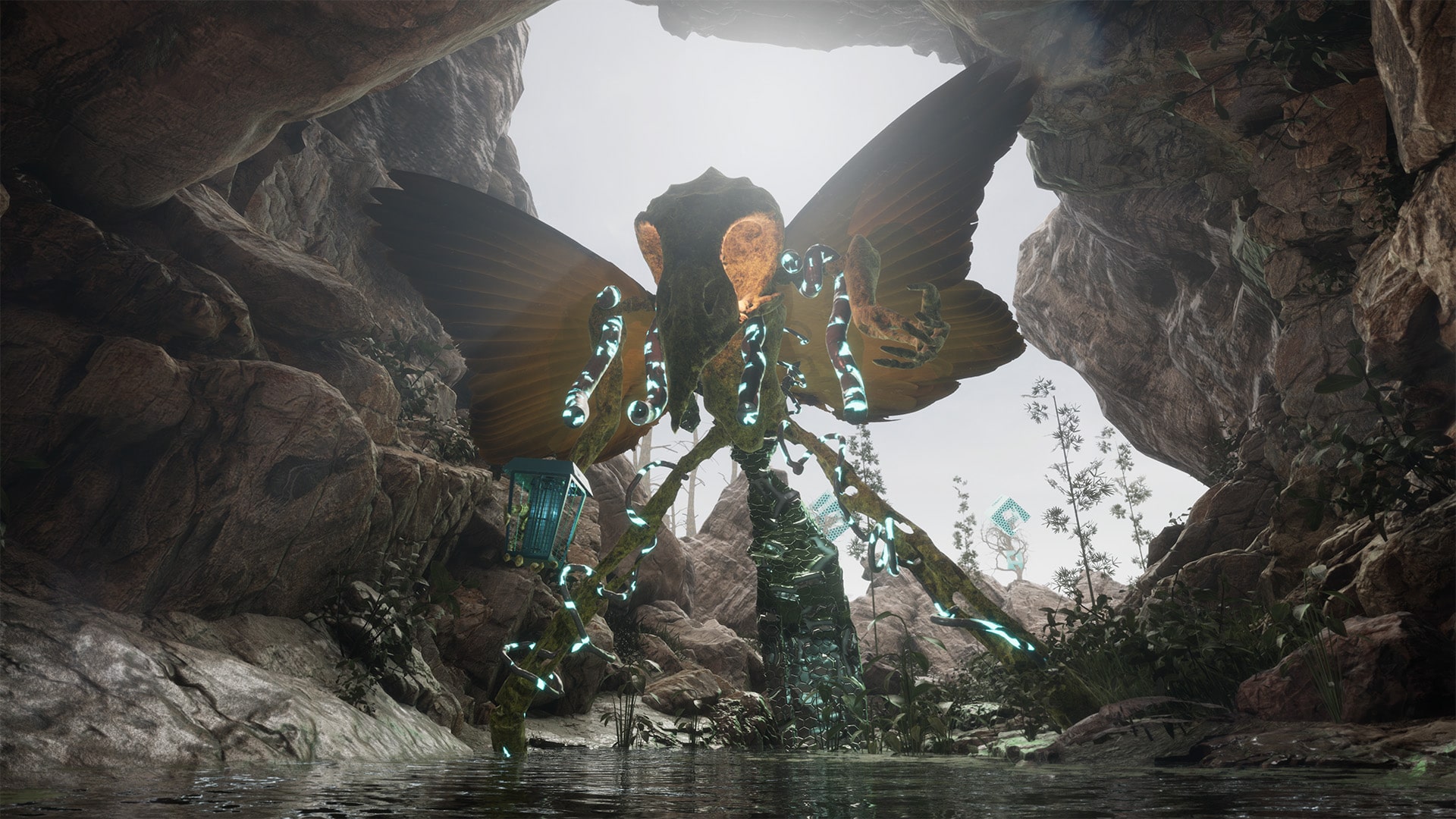 Jakob met LUMA’s curator Vassilis Oikonomopoulos about four years ago. At that point, he was finishing another artwork called RE-ANIMATED, about an extinct honeycreeper bird of Kauai in Hawaii. This peaked Vassilis’ interest and they began exploring a future collaboration. Jakob started to think about a project that will be interesting to create with LUMA and the idea of focusing on wetlands came early on.

Most of Jakob’s past works deal with the narratives such as extinction or tourism. Wetlands, as a creative departure point, are more subtle. It is the world right beneath our feet, but a forgotten habitat. All civilizations in the world are positioned by wetlands. Salt marshes, between the salt sea and the soil, are able to continuously create freshwater necessary for human survival. In the 1700s, wetlands began to disappear as they were irrational - hard to farm and navigate - despite being essential for freshwater. Jakob realized he could inspire people to look at their wetland landscapes through creating this artwork.

This interest was amplified during the pandemic. When Jakob arrived in Arles, he was supposed to be an artist in residence for three months. Then the pandemic started, and he ended up staying for a whole year. “And it really changed how I felt about working with VR.”

Jakob was let intuitively by the local landscape, rather than research and a prior narrative. The artist aimed to create something hyper-sensorial. He wanted to create an experience for the viewer of sinking into the mud and connecting with the energy of the landscape to evoke an uplifting spiritual experience to the people countering the COVID blues.

With a year ahead of him, Jakob had ample time to experience the Salin-de-Giraud salt marshes with his collaborators, in this miraculous shapeshifting landscape that alternates between a desert and the salty sea, full of primordial energy. Normally when you create VR, you think about space. Artists typically begin by drawing their design and then rendering these abstract concepts into 3D design. “I’ve been doing this for 15 years now, so it means I can kind of freestyle. And this is the first project where I truly let go. I've never done it to this extent in the past.” the artist says. He would crawl through the mud and look at natural formations only five centimetres large. In turn, Jakob is making the viewer see the minuscule at 200 meters large and a piece of wood turning into crystal. It is an alien landscape full of magical things such as strange geological formations. With Liminal Lands, Jakob developed a new way of working with the landscape. 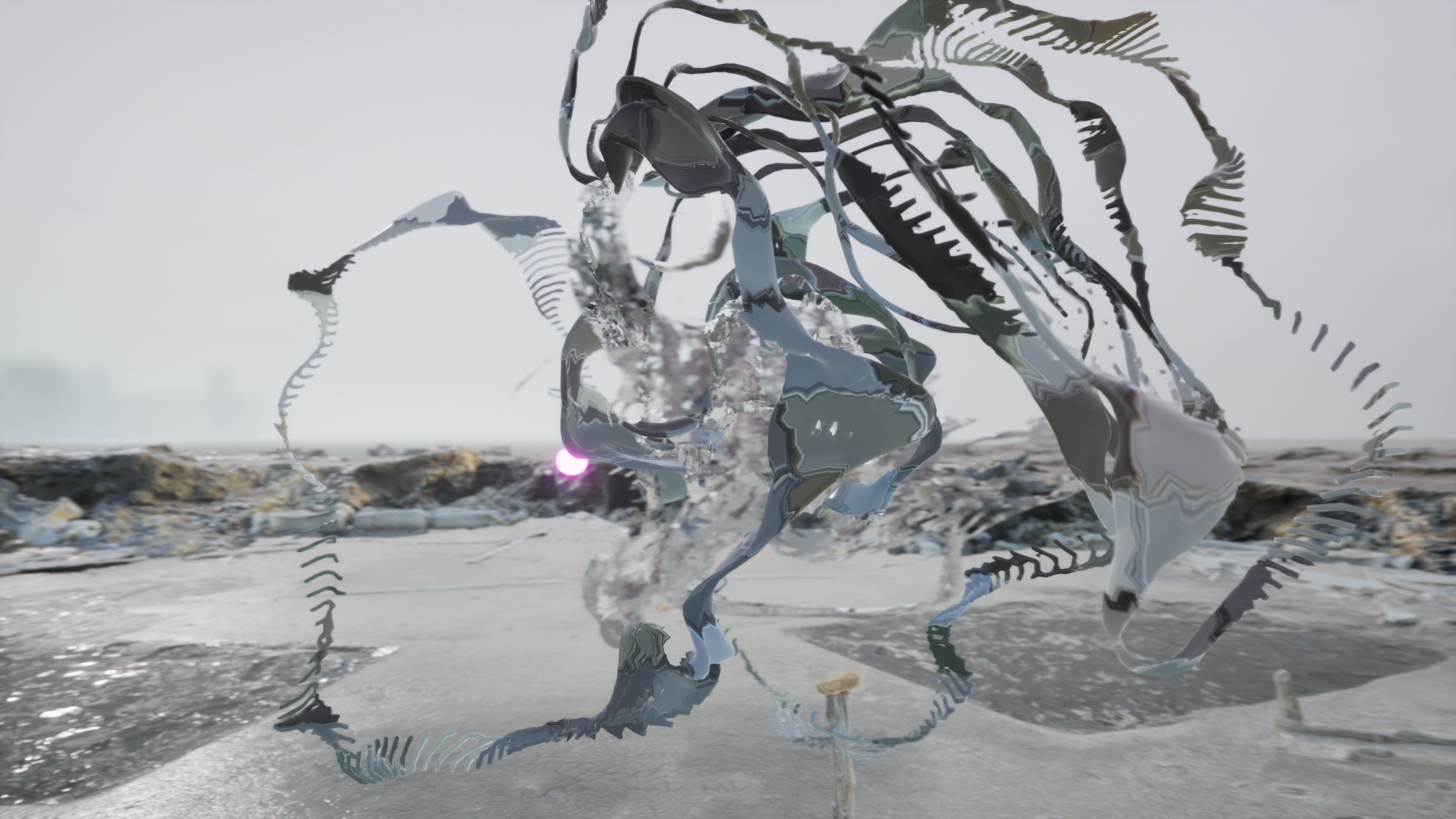 For Jakob, it’s the first time that the wetland has become the centre idea of the whole project. He had worked on two projects in the past that took place partially in wetlands, one is a 2017 work about a wetland in Brooklyn and the other is Reanimated, that took place in a mountainous wetland. “I realized all my favourite artworks took place in wetlands,” Jakob said with a grin. He is interested in these wetlands and swamps because it's an environment that's closely connected to human history. They are both the foundations of the landscape and forgotten spaces. A log that fell into the wetland 2000 years ago can sometimes be found preserved. The energy of the soil offers a different perspective on temporality. Technology is quite rational in its design, but the artist needs to work with many challenges when trying to encapsulate a landscape that is mystical and strange, morphing all the time.

Working in Camargue, Jakob learned a lot about how salt, alligators, bacteria, sun and water elements work together. When water evaporates, the soil retracts and may change shape. And this is changing all the time. It’s a bit like following life on another planet, like science fiction. Jakob was mind-blown and it completely changed his perspective.

He tries to capture this in the artwork. The viewer goes from a realistic perspective, the lighthouse modelled from an actual one in the region, to something very irrational. The familiar invites people into the VR world. Slowly, things change scale. Suddenly, the vision closes on to rocks and a tree. On the day that Jakob scanned these elements, the sun was high and bright in the sky and there was wind and foam blowing on the landscape. So the foam and bubbles turned to crystals. This is what he documented in the strangle soapy and bubbly forms becoming crystal in Liminal Lands.

The artwork involves a continuous change of scale, and parts of the storytelling are not made explicit to leave room for interpretation. The viewer goes through different perspectives to learn about the landscape. From a lighthouse, suddenly you go from a human scale into the mud. You sink into the ground to the size of an insect, onto a crystallized white world. Slowly, you return to a human perspective. This world is alive. The plants are dancing with you as you move and react to you. Jakob takes the viewer through six different seasons under different conditions.

Liminal Lands is developed in a site specific setting in Camargue, but Jakob thinks that the development is a way of digging deeper into the fact of life, deep enough that suddenly he could reach something he didn't know before he started. The artwork is not limited to being exhibited in its place of origin. Tt's about wonderment when facing natural energies and unpredictability of the planet that inspires not only to the artist but everyone.

When asked about exhibiting artworks involving new technologies compared to more traditional mediums such as paintings and sculpture, Jakob, who started with paintings himself, says that there are actually more commonalities between his work and paintings than we would think. He creates colours, starting from algae in the landscape, and uses  a brush to paint. Jakob’s work is about rhythm, movement, music, colour, choreography, space, and emotion. Technology is just the entry point to work with these elements.

Liminal Lands is a popular piece at the Prélude exhibition. The work is both accessible and complex as people traverse the landscape together. Jakob choreographed the work, looking at it from above and thinking about the movement of the viewers. This multi-player piece is the first one that Jakob designed to this extent. The full experience is 18 minutes long. Viewers who experienced the complete work would even walk up to Jakob and thank him. The artist thinks that comes from the openness of the work. This VR work allows for a change of mindset during the pandemic, and Jakob considers it another kind of care that could renew our thinking about the digital media. 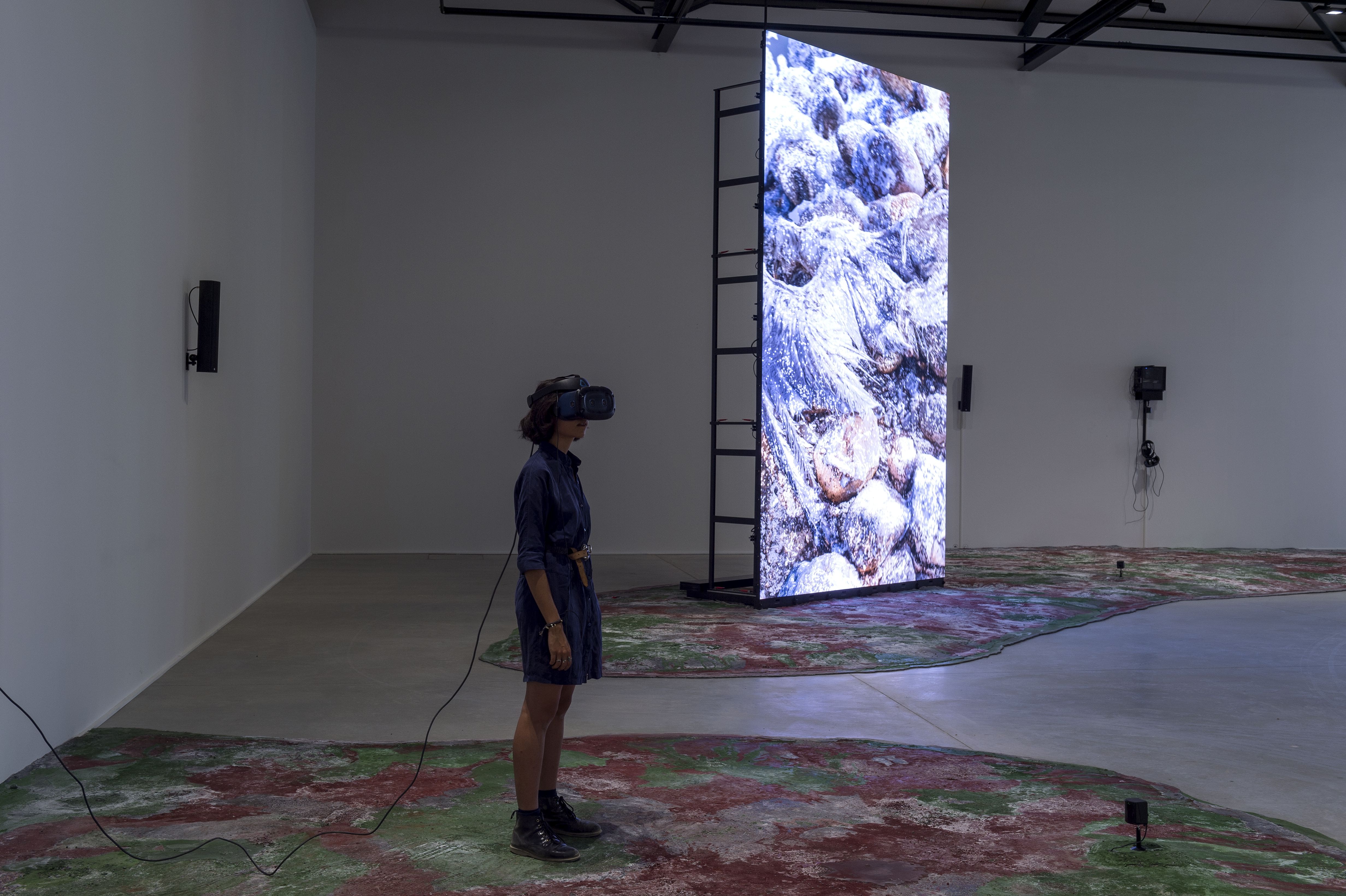 With Liminal Lands, Jakob shares his fascination for wetlands. It is a type of landscape that could be easily overlooked, but it is primordial and essential, life and death at the same time. Wetlands occupy a central place in ecology for decomposition and the regeneration of soil. They are the beginning and the end of everything, just like the mushroom. For Jakob, contemporary art, especially digital art, has a lot in common with literature and the sciences. Whereas not all of his artworks involved a didactic narrative centring around the climate crisis and other problems such as exploitative tourism brought on by colonialism, the artist is deeply concerned and always inquisitive about societal issues. Digital arts offer new possibilities. How else would you create a sensorial experience for people understand that the soil is alive?

When asked about what he wants to explore in the future, Jakob shares his interest in motion capture performance and expresses his wish to create more operatic works involving music, characters and landscape. We very much look forward to these new stories that he will tell.