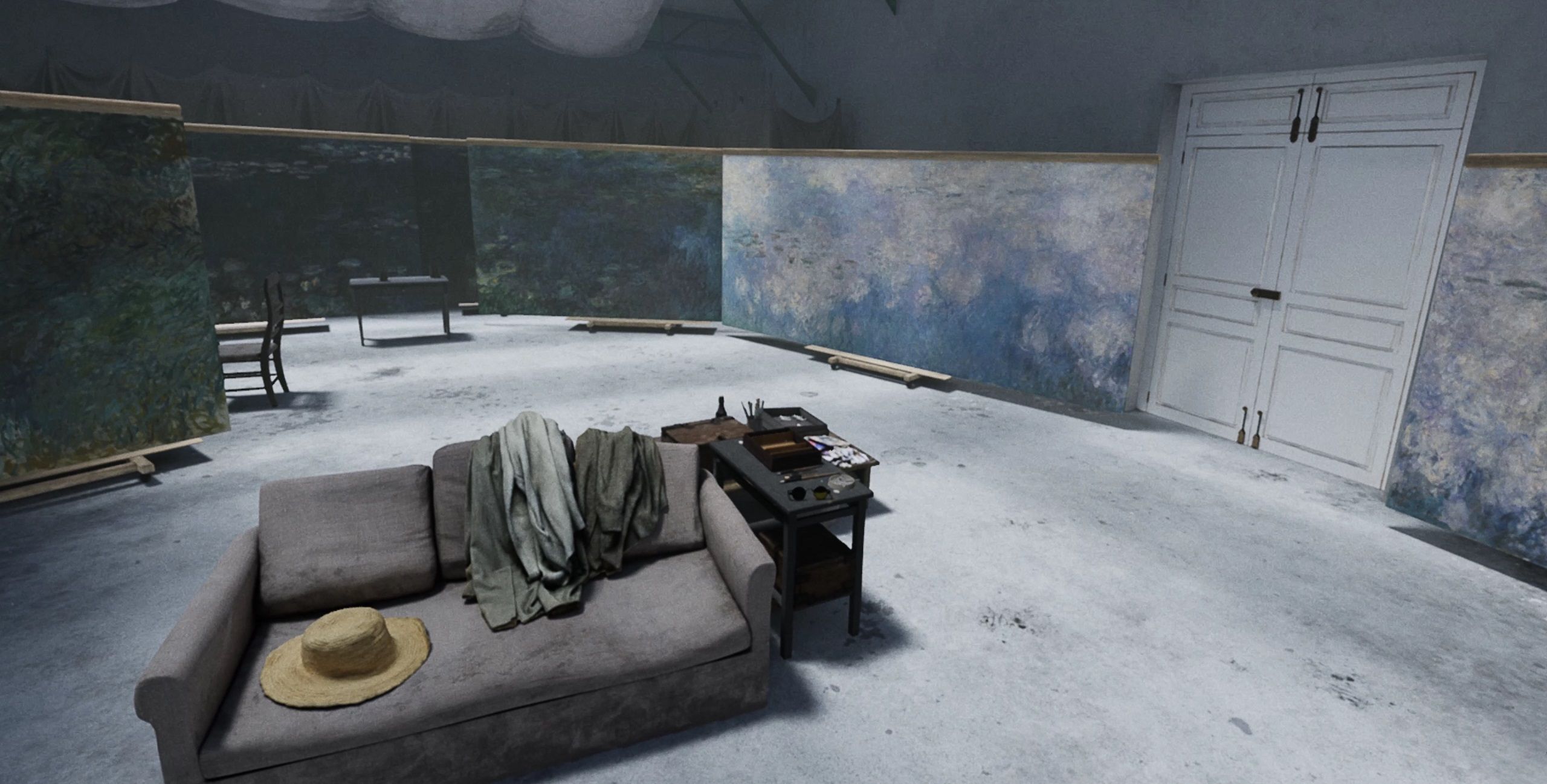 Could you tell us about the paintings that inspired this VR experience?
Monet was one of the leading figures of the Impressionist movement in France. He was a painter who focused on depicting landscapes and nature, while trying to capture the effect of light as it changed with the time of day and the seasons. Throughout his life he had tried to create a very large painting based on these climatic variations, or the variation of light on different motifs. His last big project was Les Nymphéas, or Water Lilies – a series of murals, which he based on the pond in his garden at Giverny – a body of work which we have come to regard as the first art installation, in the contemporary sense of the term.

Monet decided to house his works in L’Orangerie, a building in the heart of Paris’s Jardin des Tuileries which, at the time, was vacant. It’s a perfect location – we’re in a park, which is a garden of sorts, and are also alongside water, being close to the banks of the River Seine. Monet wanted the space where the Water Lilies were shown to be one of contemplation and rest for city dwellers. He liked the contrast between the nearby Place de la Concorde, which was one of the liveliest places in the city, and the opportunity to withdraw into the heart of the Tuileries.

How did Monet create the Water Lilies?
Monet worked with botanists to create his garden at Giverny, creating flowerbeds and a pond which was, in itself, a masterpiece, planted with rare waterlilies and topped with a Japanese bridge, draped in Wisteria.
Water Lilies appear as a motif in Monet’s works from the 1900s, but it was not until the First World War that he decided to create a masterpiece that would allow him to capture this scene in full, in the form of an installation. He built a studio in his garden specifically to paint the large panels, each of which measures four to six metres wide and two metres in height. 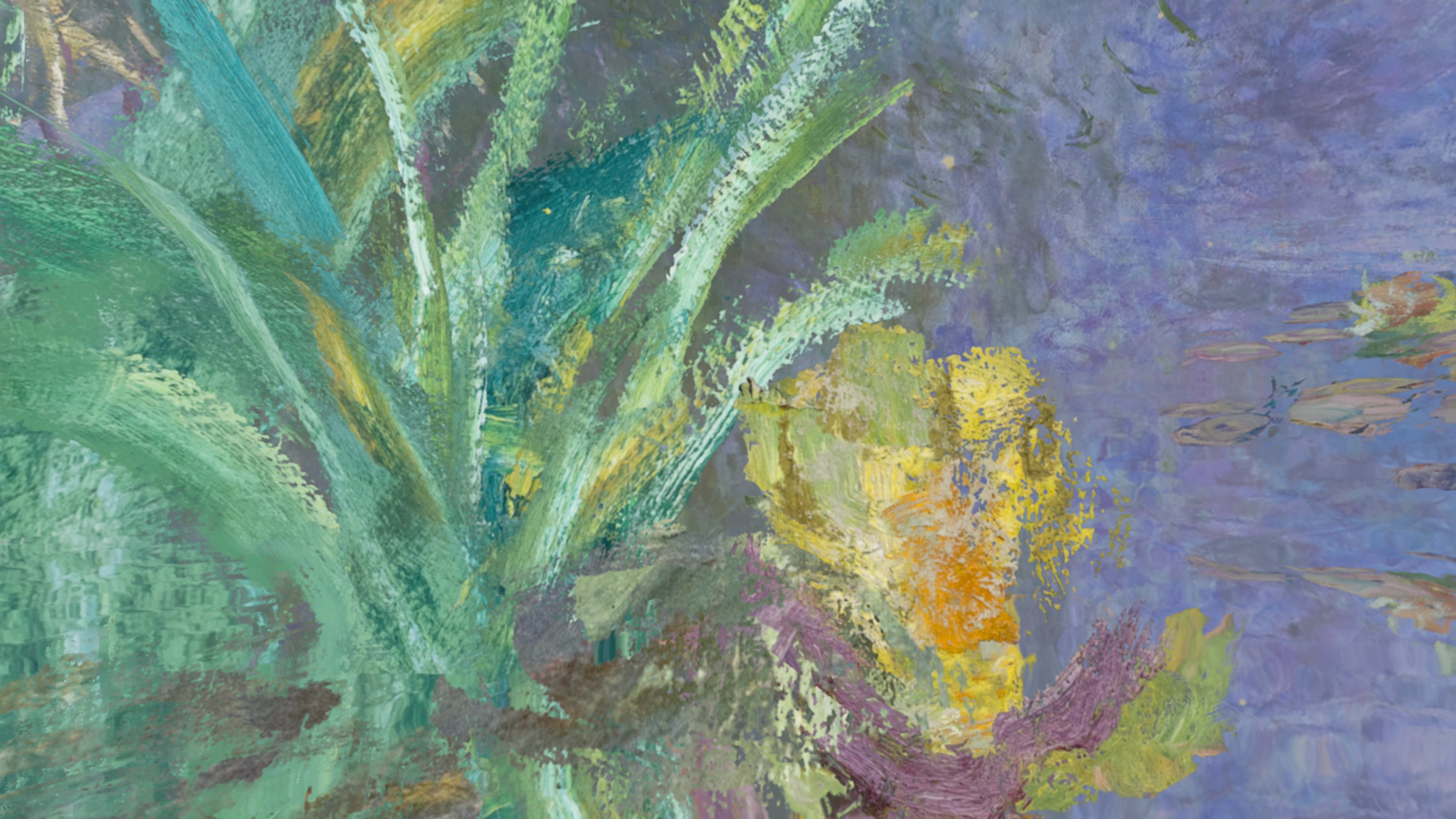 What happens in this VR experience?
For me, it was important that this was more than a virtual studio visit. It’s an experience that has a narrative, with a beginning and an end. The viewer starts in Paris, in the first room of the Musée de l’Orangerie. From here, they are transported to Claude Monet's garden in Giverny. The scene goes from night to the day, seasons and years pass by before you, as Monet would have seen them. You dive into Monet’s paintings.
The various elements of his paintings emerge, and you feel the touch of his brush arriving, finally, in the studio at Giverny that he built specially to finish his great series of murals. It’s an amazing adventure: we get to be in the painter's shoes, we inhabit his gaze. We are with him in his garden, in his studio. The viewer becomes a privileged witness to this story.

How do you envisage technology shaping the future of museum programming
Our role as a museum is to offer different ways of looking at paintings in a sensory way, but also by giving some artistic and historical context about the works we are presenting. That’s why it’s so important for us as a museum to explore this technique and take a lead i creating content.
People want to discover art in different ways, and I think there’s a real demand from audiences to have these types of installations in museums. It opens an incredible door to the history of art and artworks.